Dr. APJ Abdul Kalam was born on 15 October 1931 in humble family background. Due to his work in the field of Scinece and Technology and space science, he was known as ‘Missile Man’ of India. Today on 15 October 2019 whole of the country is celebrating APJ Abdul Kalam’s 88th birth anniversary. On this day Prime Minister Narendra Modi, Home Minister Amit Shah and Defence Minister Rajnath Singh remembered him and called a great son of India.

Prime Minister Narendra Modi tweeted,  “Humble tribute to Dr. APJ Abdul Kalam Ji on his birth anniversary. He dreamed of a capable India of the 21st century and made his own special contributions in this direction. His ideal life will always inspire the people of India.” 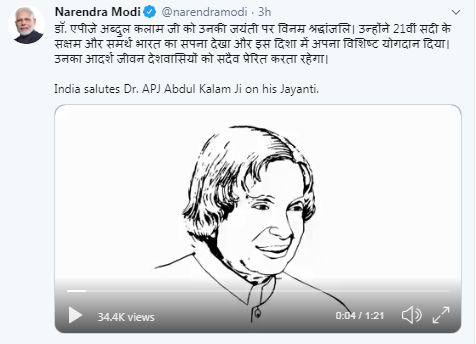 The Kalam Center under Kalam Bharat Programme has opened 270 libraries in the schools in Telangana as the Kalam Library Project. The project has been inaugurated on 88th birth anniversary of Dr. APJ Abdul Kalam. Let’s understand his life as a lesson in 10 following points:

2. Wanted to be IAF Pilot
APJ Abdul Kalam was an average student in his class but had deep interest in mathematics. In 1954, Kalam completed his graduation in Physics from St. Joseph’s College in Tiruchirappalli (affiliated to Madras University). He wanted to join Indian Air Force (IAF) as a fighter pilot. Once he applied in IAF and got ninth rank in merit list while vacancies were only eight.

3. Birds became inspiration
Once as a President, he went to a school in Mumbai, when asked by a child, he told that he got an inspiration of flying high from the birds. Dr. Kalam received a degree in aeronautical engineering from Madras Engineering College in 1960.

4. India’s Missile Man
India built its first indigenous satellite launch vehicle SLV-3 under Dr. Kalam’s direction. He also helped India to built missiles like ‘Agni’ and ‘Prithvi’. Dr. Kalam is famous as Missile Man of India because of his major contribution in the same field.

5. APJ Abdul Kalam and Vision 2020
Dr. APJ Abdul Kalam prepared a vision 2020 document so that India can become a superpower in the field of science and technology.  According to his plan, medium range missiles should have developed. He also wanted to make Anti Tank Missiles, Ground to Air and Reintree Experiment Launch Vehicle (Rex).

6. Books by Dr. Kalam
Dr. APJ Abdul Kalam received doctorate degree from more than 40 universities. He has written many books and some of them are – Wings of Fire, India 2020, Ignited Maid, My Journey among others.

7.  Awards and Recognitions
Dr. APJ Abdul Kalam was awarded the country’s highest civilian honor, the Padma Bhushan in 1981 and then the Padma Vibhushan in 1990 and the Bharat Ratna in 1997. Kalam is the third President of the country who received the Bharat Ratna before his appointment to the highest post of India. Dr. Sarvapalli Radhakrishnan and Zakir Hussain received this honour before him.

9. Dr. Kalam’s death
Dr. APJ Abdul Kalam was delivering his last lecture at the Indian Institute of Management Shillong when he experienced some discomfort and collapsed. He was declared dead of a sudden cardiac arrest at 7.45 pm on 27 July 2015.

10. APJ Abdul Kalam Memorial
It was built in the memory of great scientist by DRDO in Pei Karumbu, in the island town of Rameshwaram, Tamil Nadu. The replicas of rockets and missiles which Kalam had worked with are on display at this memorial.

ICICI Bank Recruitment 2019: ICICI Bank Job Openings for fresher in India for the vacancies of the clerk, PO,... read more

1. Prime Minister Narendra Modi announced the creation of the post of Chief in which sector in his Independence... read more