India and Japan organised a Defence Ministerial meeting, co-chaired by Union Defence Minister Rajnath Singh and Japanese Defence Minister Takeshi lwaya, in Tokyo on September 2, 2019. The meeting involved discussions on various issues of mutual concern such as ways to further strengthen the existing bilateral co-operative arrangements and adopt new initiatives towards achieving peace and security in the region.

The Indo-pacific vision was discussed during the Defence Ministerial meeting with an expression of India’s preference for a rules-based order along with centrality of Association of Southeast Asian Nations (ASEAN) and inclusiveness and security for all.

The meeting also highlighted the significance of the Special Strategic and Global Partnership between India and Japan, especially in addressing the security, stability and regional peace.

The Defence Ministers of the two nations also held discussions on the emerging regional security issues.

Indian Defence Minister Rajnath Singh also discussed about revoking of Article 370 of the constitution and reiterated that talks with Pakistan and cross-border terrorism cannot go hand-in-hand.

Singh further extended an invitation to Japanese companies to participate in the biennial DefExpo 2020 to be held in Lucknow. 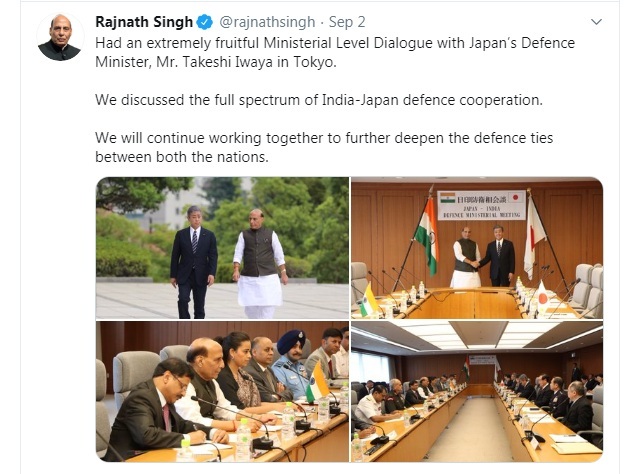 Rajnath Singh also met Japanese Prime Minister Shinzo Abe and apprised him regarding the contents of the discussion at the Defence Ministerial Dialogue.

The Indian Defence Minister also conveyed to the Japanese PM that Jammu & Kashmir is an integral part of India and revoking of Article 370 is only meant to benefit the people of Jammu & Kashmir and Ladakh. He emphasized that Pakistan has no right in this internal matter.

1. Prime Minister Narendra Modi announced the creation of the post of Chief in which sector in his Independence... read more

The International Youth Day was observed across the world on August 12 to recognize the efforts put in by... read more