Prime Minister Narendra Modi will be honoured with the Global Gatekeepers Award for his leadership in India’s Swachh Bharat Abhiyan by Bill & Melinda Gates Foundation.  The foundation stated that Narendra Modi is receiving the award at the Goalkeepers Global Goals Awards for the progress India has made in improving sanitation, as a part of its drive towards the achievement of UN’s Sustainable Development Goals. PM Modi will be receiving the award in the United States.

This is PM Modi’s third award in the span of the last ten days. The announcement was made by  MoS PMO, Jitendra Singh, who tweeted saying, “, “Another award, another moment of pride for every Indian as PM Modi’s diligent and innovative initiatives bring laurels from across the world.” Singh stated that PM Modu will receive the award from Bill & Melinda Gates Foundation for Swachh Bharat Abhiyaan during his visit to the US. 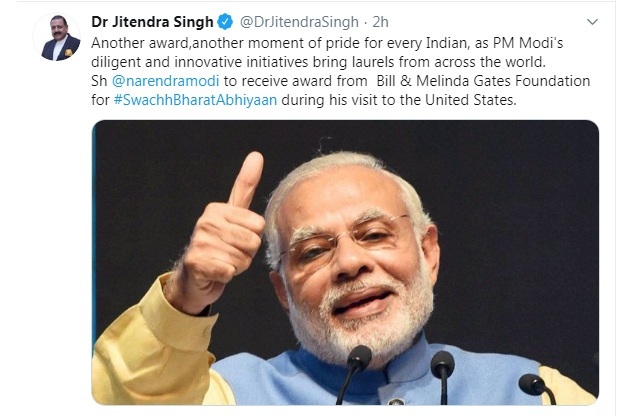 Gotabaya Rajapaksa, who is the brother of Mahinda Rajapaksa, has won the presidential election in Sri Lanka. Sri Lanka’s... read more

The G7 summit concluded on August 26, 2019 at Biarritz, Nouvelle-Aquitaine, France. No joint communique was issued at the... read more

Vikram Sarabhai: Honoured by Google Doodle, Know everything about him

Google has paid its tribute to the founder of ISRO Vikram Sarabhai by a Google Doodle. Google is celebrating... read more