PM Modi was greeted by Vladimir Putin at Vladivostok and the Russian President, in a special gesture, also accompanied Modi to the Zvezda shipyard in Vladivostok. Following the shipyard visit, both the leaders participated in the 20th India-Russia Annual Summit. While addressing the press after the summit, PM Modi said that both India and Russia are against outside influence in the internal matters of any nation.

PM Modi is scheduled to attend the Eastern Economic Forum in Vladivostok tomorrow, as the Chief Guest of the forum.

PM Modi with his visit to Vladivostok has become the first Indian prime minister to visit the Russian Far East Region. The Prime Minister is scheduled to attend the Eastern Economic Forum in Vladivostok along with other foreign leaders. Speaking on his visit, the Prime Minister said that his visit to Russia will give a “new energy and a new impetus” to relations between the two countries.

PM Modi stated in a press interview that nature itself connects India to the far-east. The Prime Minister referred to the “Siberian cranes-Gujarat” link and pointed out that every December, Siberian cranes fly to his native state Gujarat, which is like a tourist destination for them and many Indians go to the Far East.

PM Modi visited the Zvezda shipbuilding complex in in Vladivostok along with Russian President Vladimir Putin. The Zvezda shipyard will produce heavy tonnage ships, offshore platform elements, ice-class vessels, special vessels, and other marine equipment. The ships built at the shipyard will be used to deliver LNG and Russian oil to world markets including India. Prime Minister Modi tweeted saying that the Zvezda shipyard is poised to make a huge contribution to the development of Arctic shipping. 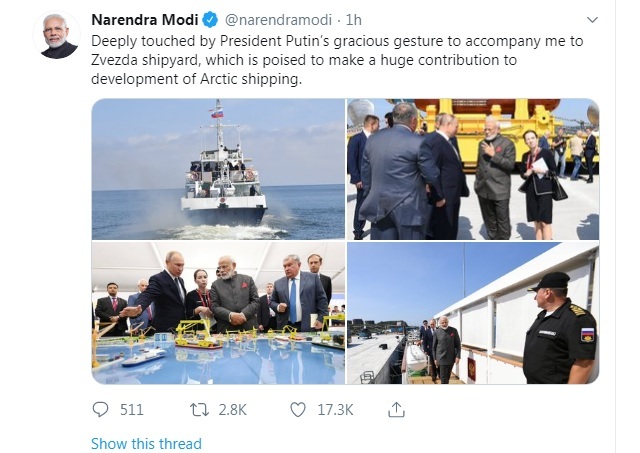 Post the Zvezda shipyard visit, PM Modi and Vladimir Putin held the 20th India-Russia Annual Summit. The summit was held on the sidelines of the Eastern Economic Forum. The annual summit  covered a number of regional and international issues of mutual interest including the situation in the Gulf region, the Afghan peace process and the possibilities to further strengthen cooperation between the two countries in the oil and gas sector.

India and Russia exchanged 25 agreements in the field of defence, trade, industrial cooperation, investments, connectivity corridors and energy. The agreements were exchanged in the presence of Prime Minister Narendra Modi and Russian President Vladimir.

PM Modi, during delegation-level talks with Russian President Vladimir Putin, said, “Russia is an integral friend and trustworthy partner of India.” Modi further credited the Russian President for personally focusing on expanding the special and strategic partnership between the two countries. Modi said that as integral friends, the two leaders have met each other regularly and spoken about several issues. 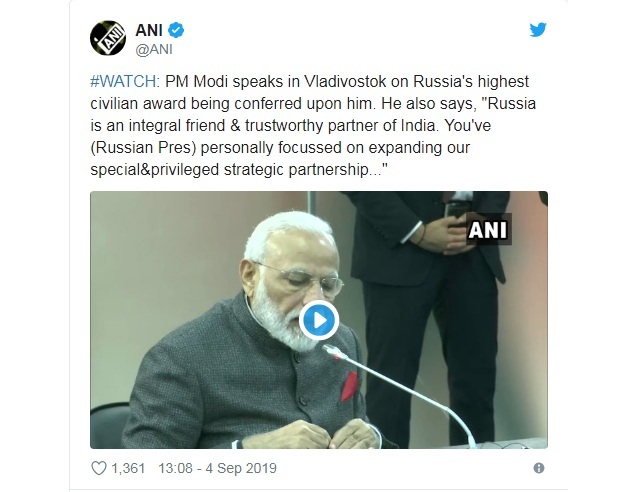 PM Modi expressed his gratitude to the Russian President Vladimir Putin and Russia for deciding to honour him with Russia’s highest civilian award. The Indian prime minister will be awarded the ‘Order of St Andrew the Apostle’ in April for his exceptional services in promoting bilateral ties between India and Russia.

PM Modi stated that a proposal has been made to have a full fledged maritime route, which will link Chennai in India to Vladivostok in the Russian Far East region.

PM Modi’s visit to the Far East Region of Russia aims to diversify and further strengthen the bonds of the two nation’s robust bilateral relations. PM Modi is the first Indian Prime Minister to ever visit the region.

The key objective behind PM Modi’s visit is to participate in the 5th Eastern Economic Forum as the Chief Guest at the invitation of the Russian President and to conduct the 20th India-Russia Annual Summit.

World Elephant Day is to inform people and organisations about the threat that an elephant faces. Although, elephants are... read more