Stephen Hawking was regarded as one of the most brilliant theoretical physicists in history. His work on the origins and structure of the universe, from the Big Bang to black holes, revolutionized the field, while his best-selling books have appealed to readers who may not have Hawking’s scientific background. Hawking died on March 14, 2018.

When Stephen Hawking was diagnosed with motor-neuron disease at the age of 21, it wasn’t clear that he would finish his PhD. Against all expectations, he lived on for 55 years, becoming one of the world’s most celebrated scientists.

Hawking, who died on 14 March 2018, was born in Oxford, UK, in 1942 to a medical-researcher father and a philosophy-graduate mother. After attending St Albans School near London, he earned a first-class degree in physics from the University of Oxford. He began his research career in 1962, enrolling as a graduate student in a group at the University of Cambridge led by one of the fathers of modern cosmology, Dennis Sciama.

The general theory of relativity was at that time undergoing a renaissance, initiated in part by Roger Penrose at Birkbeck College, London, who had introduced new mathematical techniques. These showed that generic gravitational collapse would lead to singularities — infinities that signal the need for new physics. 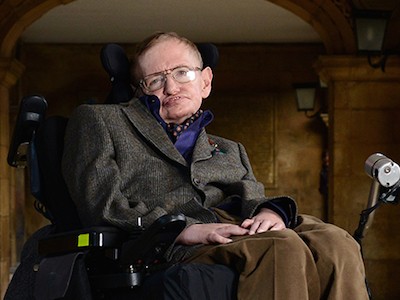 Stephen Hawking: A life in science

The implications for black holes and The Big Bang were developed by Hawking in a series of papers collated in the 1973 monograph The Large Scale Structure of Space-Time (Cambridge University Press), co-authored with George Ellis, a near-contemporary who had also been a student of Sciama. Especially important was the realization that the area of black holes’ horizons (‘one-way membranes’ that shroud the singularities, and from within which nothing can escape) could never decrease. The analogy with entropy — a measure of disorder that likewise can never decrease — was developed further by physicist Jacob Bekenstein.

These findings gained Hawking election to the Royal Society in London in 1974, at the age of 32. By then, he was so frail that both movement and speech were difficult, and most of us suspected that his days in front-line research were numbered. But in that same year, he came up with his most distinctive contribution to science: Hawking Radiation.

My Brief History recounts Stephen Hawking’s improbable journey, from his post-war London boyhood to his years of international acclaim and celebrity. Illustrated with rarely seen photographs, this concise, witty and candid account introduces readers to the inquisitive schoolboy whose classmates nicknamed him ‘Einstein’; the jokester who once placed a bet with a colleague over the existence of a black hole; and the young husband and father striving to gain a foothold in the world of academia.

A Brief History of Time Was there a beginning of time? Could time run backwards? Is the universe infinite or does it have boundaries? These are just some of the questions considered in an internationally acclaimed masterpiece by one of the world’s greatest thinkers. It begins by reviewing the great theories of the cosmos from Newton to Einstein, before delving into the secrets which still lie at the heart of space and time, from the Big Bang to black holes, via spiral galaxies and strong theory.

By linking quantum theory and gravity, Hawking showed that a black hole would not be completely black, but would radiate with a well-defined temperature that depended inversely on its mass (S. W. Hawking Nature 248, 30–31; 1974). Black-hole entropy was more than just an analogy. The implication was that the radiation would cause black holes to ‘evaporate’. This process would be unobservably slow, except in ‘mini-holes’ the size of atoms — and these are thought not to exist. Yet Hawking radiation — and the related issue of whether information that falls into a black hole is lost or is somehow recoverable from the radiation — was a profound issue, and one that still engenders controversy among theoretical physicists. Indeed, theorist Andrew Strominger at Harvard University in Cambridge, Massachusetts, said in 2016 that one of Hawking’s papers on the subject (S. W. Hawking Phys. Rev. D 14, 2460–2473; 1976) had caused “more sleepless nights among theoretical physicists than any paper in history”.

By the end of the 1970s, Hawking had been appointed to the Lucasian Chair of Mathematics at Cambridge (former incumbents include Isaac Newton and Paul Dirac); he held the post until he retired in 2009. During these years, in which his focus shifted to the quantum aspects of the Big Bang, the issue of information loss in black holes continued to challenge him.

In 1985, Stephen underwent a tracheotomy, which removed his already limited powers of speech. He was able to control a cursor on a screen and type out sentences — albeit with increasingly painful slowness (first with his hand, and eventually only with a cheek muscle). A speech synthesizer processed his words and generated the androidal accent that became his trademark. In this way, he completed his best-selling book A Brief History of Time (Bantam, 1988), which propelled him to celebrity status.

Had Hawking achieved equal distinction in any other branch of science besides cosmology, it probably would not have had the same resonance with a worldwide public. As I put it in The Telegraph newspaper in 2007, “the concept of an imprisoned mind roaming the cosmos” grabbed people’s imagination.

In 1965, Stephen married Jane Wilde. After 25 years of marriage, and three children, the strain of Stephen’s illness and of sharing their home with a team of nurses became too much and they separated, divorcing in 1995. Jane wrote a book about their life together, Travelling to Infinity(Alma, 2008), and both she and Stephen were happy with the telling of their story in the 2014 film The Theory of Everything (although it elides and conflates Stephen’s science). After a second, briefer marriage, Stephen was supported by an entourage of assistants, as well as his family.

Stephen remained remarkably positive throughout his life, despite the immense frustration that his condition clearly caused. He enjoyed theatre and opera trips, and he seemed energized rather than exhausted by his travels to all parts of the world, as well as by his regular trips to the California Institute of Technology in Pasadena. He retained robust common sense and a sense of humour, expressed forceful opinions, supported political causes and was happy to engage with the media, despite its insistent attention. His comments gained outsized attention even on subjects in which he was not a specialist, such as philosophy and the dangers of artificial intelligence.

Stephen’s expectations when he was diagnosed dropped to zero; he said that everything that had happened since had been a bonus. And what a bonus — for physics, for the millions enlightened by his books and for the even larger number inspired by his achievement against all the odds.